The story of DJ Graeme Park really mirrors the story of the evolution of dance music and club culture itself. Graeme found himself working in a Nottingham record shop called Selectadisc in the early 1980s, when the very first house records began to filter through from Chicago, Detroit and New York. When the shop’s owner opened a nightclub, it was only natural he should turn to Graeme to select the discs. Determined to showcase this new style of music, his reputation as a house pioneer soon brought him to the attention of The Haçienda in Manchester, who asked him to cover for Mike Pickering while he went on holiday in 1988. Simply put, there was no-one else in the country who could do the job. The Summer of Love followed and Parky quickly became one of the biggest names on the emerging dance scene. Aside from his nine year residency at The Haç, he was one of the first British DJs to play places like Australia, South America, the USA, Asiaand beyond as well as producing and remixing tracks for the dancefloor, including The Brand New Heavies, Inner City, Eric B & Rakim, New Order, Sophie Ellis-Bextor and others.

The Haçienda was a club without a purpose until house music filled its cathedral-sized dimensions. It undeniably defined Graeme as a DJ, but after more than three decades as a DJ that can only be seen as one chapter in an on-going tale: ‘Yeah it was a very big chapter,’ says Graeme. ‘I guess the first was when I realised I could DJ and discovered house music from the US. The Haçienda was chapter 2, then chapter 3 was when it re-opened after closing for a couple of months in 1992. Chapter 4 was when it closed not long after I left and I played all around the world. I suppose Chapter 5 was the turn of the century and continuing my journey to where I am right now, with more variety to my gigs and music selection than ever before. Chapter 6 sees my return to live performance, which is what I did before I became a DJ, with the Haçienda Classical show’ 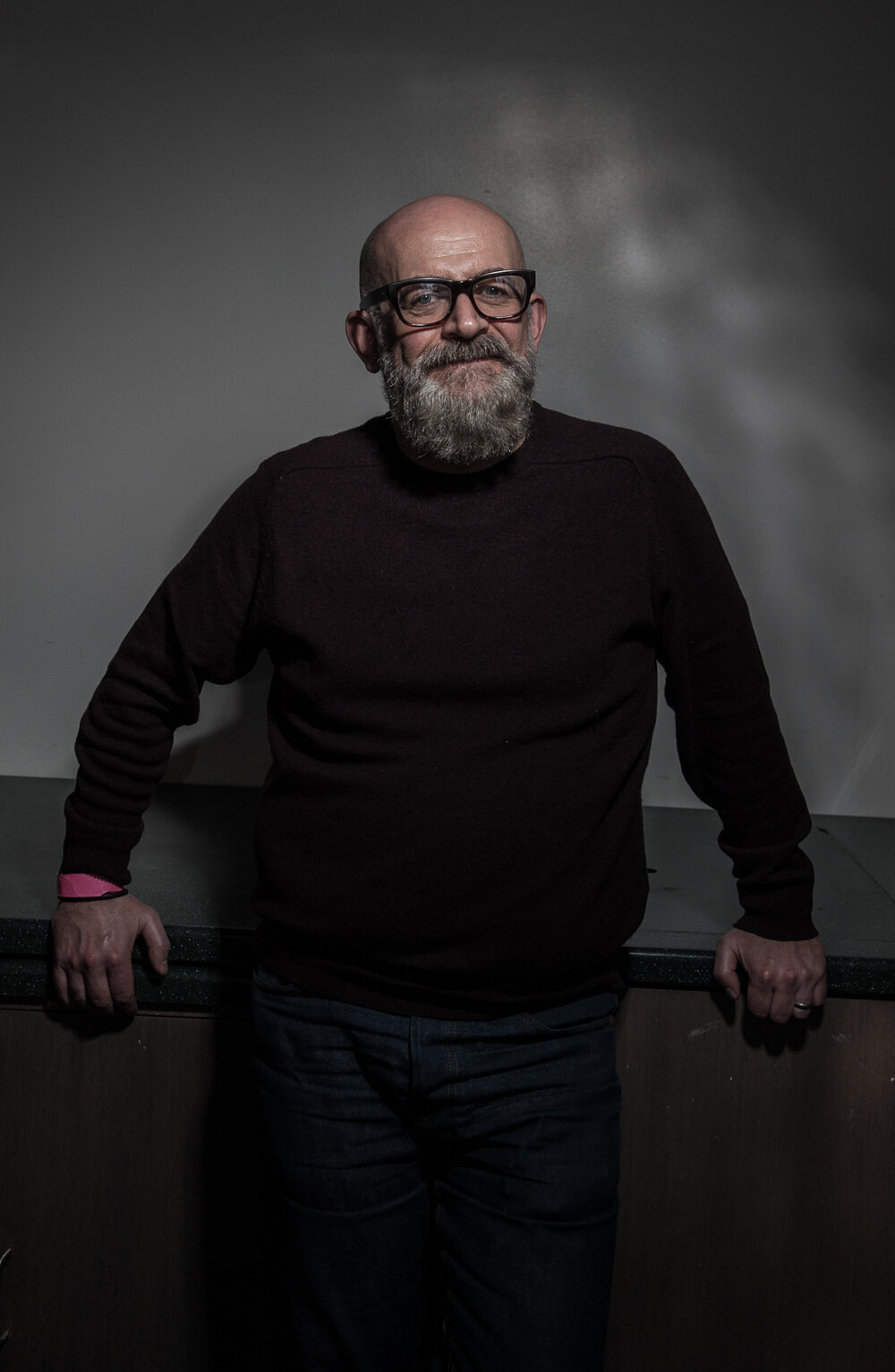 As far as Graeme’s concerned, things are as fab as ever. But where is dance music and club culture headed? Well, who better to ask directions than the man who wrote the disco A-Z? ‘I started doing it purely by accident,’ he details. ‘And then realised I was actually pretty good at it. But I never thought I’d end up doing it for over 30 years. And I see no need to stop either. I still love playing fantastic tunes in a variety of different clubs all over the place and people still want me to do it too.’

And where we are now is a very interesting place to be with regular gigs around the UK, Europe and beyond playing a selection of lesser known classic house cuts as well as new and current tunes to audiences made up of die-hard regulars and new clubbers too. There’s also a variety of occasional productions, remixes and collaborations under various guises with people such as legendary Ten City vocalist Byron Stingily, Juan Kidd, Natasha Watts and more. As a respected DJ Graeme regularly delves into the thousands upon thousands of tunes he has collected on vinyl over the years: “House music has made people channel their tastes, so I went back to my roots and pulled out some forgotten classics,” he grins, still in love with process of mining those rich seams of vinyl. “I love seeing a crowd go wild to a tune they haven’t heard for years or playing something really obscure from 20 years ago that people think is new.”

In the past few years Graeme has performed alongside a host of legendary DJs such as Todd Terry, David Morales, Derrick Carter, Louie Vega, Danny Krivit, Marshall Jefferson and others for a variety of FAC51 The Haçienda club nights playing a selection of contemporary tunes alongside a variety of forgotten classics. “We want to try and recreate the excitement of the original Haçienda when nobody knew what we were playing from one week to the next. I’m also a massive fan of the current crop of young house and dance producers who are making scores of huge club tunes that take their references from over 20 years ago. Response to our occasional Haçienda club nights has been massive from both young and older clubbers alike and it’s an absolute joy to play alongside legendary DJs that I’ve known and respected for decades.”

Graeme has been a major part of the critically acclaimed Haçienda Classical shows which have performed around the UK since 2016 to rapturous response where he performs live alongside the Manchester Camerata Orchestra, Peter Hook and special guest vocalists to a set of classic and contemporary club tunes. This euphoric show has had rave reviews and gives you the chance to hear classic club tunes like you’ve never heard them before with a full orchestra, live percussionists and a choir. Graeme even performs some lead vocals at some shows too. The show opened the Pyramid Stage at the Glastonbury Festival in 2017 and has also performed at the Royal Albert Hall in London, Castlefield Bowl in Manchester, the Isle Of Wight Festival and lots of other arenas and festivals around the UK as well as in Dublin, Dubai and Switzerland.

Graeme’s recently released compilation album “Long Live House Volume 01: 1980s” is a triple CD or double vinyl album of early house cuts from 1985 to 1989 which were all massive tunes for Graeme in the early days of house. Released in December 2018, reaction to the album was huge and led to Graeme launching his own Long Live House club nights.

Celebrating over 25 years on the radio with shows on Kiss, Galaxy, Key 103, Radio City, Juice FM, Forth One, BBC Radio Manchester and more, Graeme’s years of experience help him understand the specialist skills required by a radio DJ: ‘A lot of radio shows or DJs just play the same big tunes. You can’t simply pretend you’re in a club, you have to talk to the audience and put your personality and knowledge across without sounding like an idiot.’ His weekly Graeme Park presents The Long Live House Radio Show airs on scores of radio stations both in the UK and overseas and brings in a big audience with his mix of new and older tunes mixed together like only he knows how. He recently produced a documentary “The Making Of The Haçienda Classical” for BBC Radio Manchester and in July 2021 Graeme returned to daytime radio as the Breakfast presenter on Mom’s Spaghetti radio, playing classic hip hop and r&b.

Throughout the global Covid-19 pandemic of 2020 Graeme kept himself busy livestreaming and he was an integral part of Stream GM, which broadcasted three online Haçienda House Party events to a global audience of millions. Each show featured a massive line-up of DJs as well as Haçienda Classical performances with the Camerata Orchestra, musicians and singers all performing remotely. Graeme also DJ’d on the Stream GM platform for 12 hours as part of his All Day Long live stream. As well as performing online throughout 2020, Graeme has been busy setting up Haçienda Recordings and the new label will launch in 2021. In November, Graeme was very proud to receive the Innovation Award at the annual Scottish Music Awards for his work with Haçienda Classical. The awards took place online with Graeme performing remotely with the Manchester Camerata.

Whether through his live DJ sets in clubs or online, his radio shows, his productions and remixes or simply by getting to know his audience, Graeme has spent more than three decades getting his personality across. He was there before it all started, he was at the forefront of the dance scene when it was at its zenith and he’s still there, still rocking it, years later – longer than some of the people on the dancefloor have been on the planet! And the best thing is he still loves it, still loves the music and still loves to play it for people to dance to.

‘Yeah, for my entire career I’ve been finding good tunes that I want other people to hear. The reason I keep doing it is simple: it’s my mission in life to let people hear good music.’

The Haçienda is now an apartment building (the developers asked Parky to DJ at the launch; he politely declined). At the back of the building there is a time-line, carved into steel, detailing the history of the club from Madonna‘s early performance to its closure. And there’s Graeme’s name not once, but twice, carved into the metal for time immemorial. What other DJs (what other venues?) have had that significance in clubland?